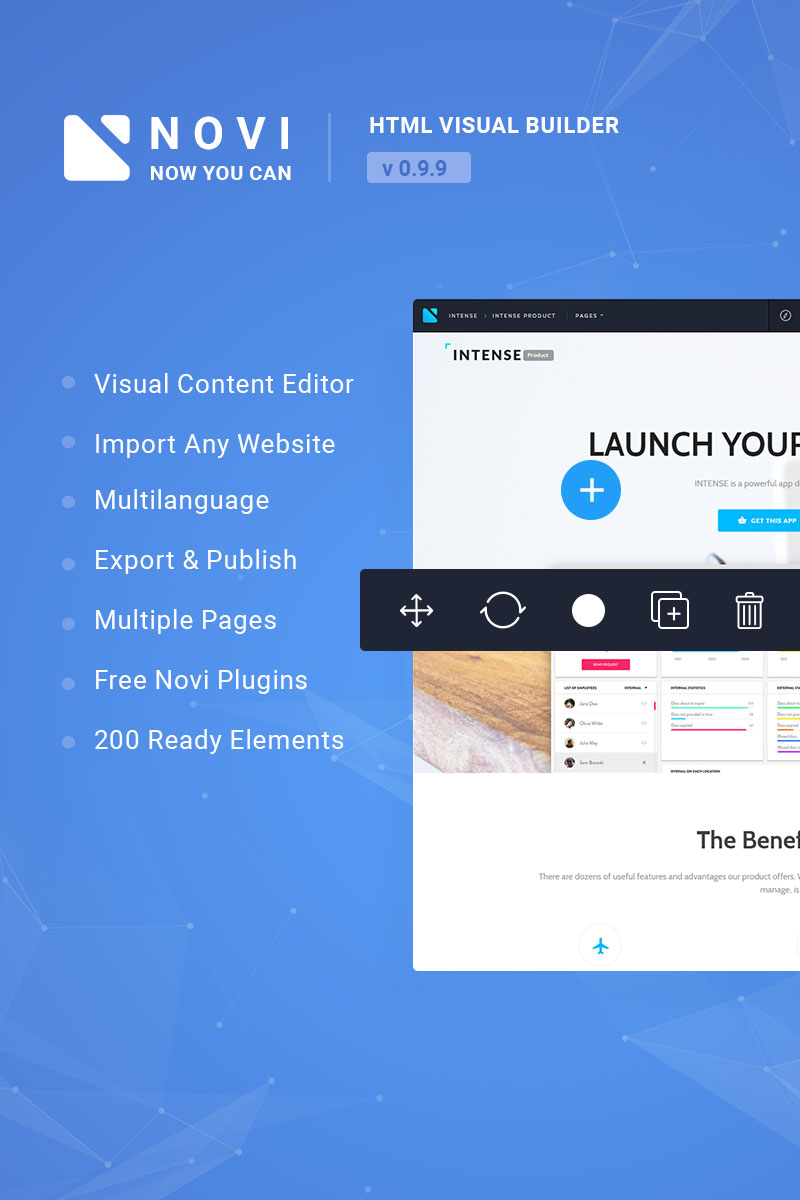 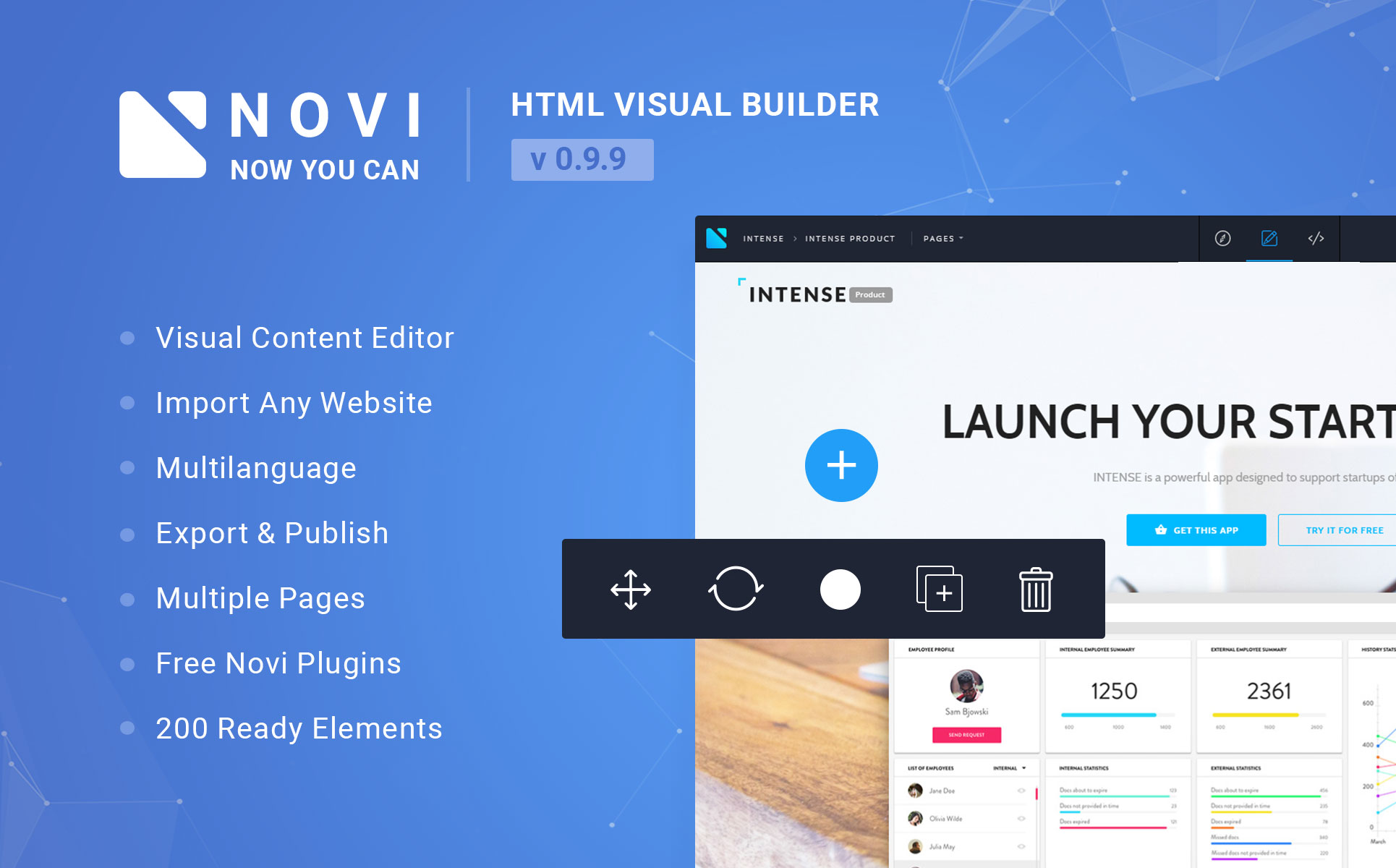 Are you an HTML templates developer? Do you sell your own products? Get closer to your clients. Import any valid HTML template into Novi Builder with 3 clicks only and multiply your earnings today.

Create as many pages as you need

Save your own presets for future use

Edit the source code of your project

Inspect your elements in code

*Note: the template should be prepared according to the steps specified in the documentation (section "Import Template")

To ensure comfortable work with Novi Builder, your system should meet the following requirements:

Display with minimal resolution of 1024x768

You can install Novi Builder on a local or remote server. See the documentation for details.

To ensure the correct work of Novi Builder, your server should meet the following requirements:

* You must have "mbstring" PHP extension enabled on your server. The server should also handle JSON files correctly.

- Have you ever wanted to add some type of analytics to your ready-made website that was built with Novi Builder? Now you can! There is a new section under Configuration called Analytics. There you can set up Google Analytics, Google Webmaster Tools, Google Tag Manager, and even Facebook Pixel.

- An issue with removing redundant Google Fonts from project settings was fixed. Now you can remove unnecessary Google Fonts to speed up your website.

- An issue with editor panels and icons was fixed.

- An issue with Swiper slider styles in default template was fixed.

- Some Christmas decorations were added.

- The anti-cache feature was added for Novi Builder editor styles. Now there is no need to hard-reload Novi Builder after applying new updates. No more visually broken components!

- The content of the default template, which comes with Novi Builder, was updated. Some descriptions and texts were changed due to some plugins removal.

- An issue with Light Gallery plugin UI was fixed.

- An issue with Tabs plugin and selected tab headings in the default Novi Builder template was fixed.

- The ability to use Unsplash service was added within Media Library. With Unsplash integration to Novi, you will have thousands of high-quality, fully-licensed stock images at your disposal.

- There was removed a deprecated Instafeed plugin (because of the Instagram API changes). All presets and demo pages, using this plugin, were updated accordingly.

- An issue with updated scroll behaviour in new versions of Google Chrome was fixed.

- The slider with Ken Burns effect styles and editing was also fixed.

- There was added a new "SEO" Section in Project Settings. Now you have the ability to generate sitemap.xml and robots.txt files.

- A few issues of importing project media files into Media Library were fixed.

- There was fixed an issue with uploading icon packs on *nix based systems.

- Reworked the appearance of the builder Header section

- Updated UX of Replace Preset in the Edit Mode

- Updated UX of Presets panel in the Design Mode

- Updated UX of the Colorpicker component

- Fixed issues when inserting an image from the media gallery

- Fixed error with gradual filesize increase of core.min.js after saving the default project

- Added the feature of image reduction in Media Library.

- Added the feature of copying an image link (relative path) in Media Library.

- Added the feature of editing letter spacing and font weight in Text Editor.

- Added the feature of saving the original image when cropping or reducing an image.

- Added the feature of importing all template images to Media Library.

- Added the feature of deleting an image from template if it already is in Media Library.

- Improved the speed of switching to Preview Mode.

- Fixed the calculation of text editor position when viewing the website in mobile version.

- Changes in text editor are now applied to the resolution, in which the user carried out his actions.

- Reworked the features of changing the font size and family.

- Reworked the Text Editor logic. Now all changes are saved in the novi.css stylesheet.

- Reworked the appearance of settings.

- Reworked the tool for editing links in text editor. Now it works similar to the Novi Link plugin.

- System and project settings were combined.

- Fixed bug with file upload in the media gallery

- Fixed the error with the unavailability of adding presets in Edit mode.

- Fixed the error of Novi core when working with stylesheets.

- Added the link to changelog in the window with new updates.

- Updated the image cropping tool. Added fields for manual input of cropped area’s size. Added automatic recognition of an optimal size for a cropped area based on the replaceable image’s size.

- Updated the carousel plugin. Added the feature of changing and moving carousel elements.

- Fixed incorrect calculation of the validation error position in a CSS file.

- Fixed a bug with displaying categories in preset settings if a name contains spaces.

- Fixed a bug when editing text in the inserted preset was not transferred to the code.

- Fixed a lot of minor bugs.

- Fixed error with a project crash after saving, when one of the presets contains Cyrillic characters in the title

- Fixed error displaying characters when printing in the "keywords" field

- Increase height of Save preset modal

- Added language support for all plugins

- Added functionality for changing the text case in text editor

- Added autocomplete for "keyword" in Save preset modal